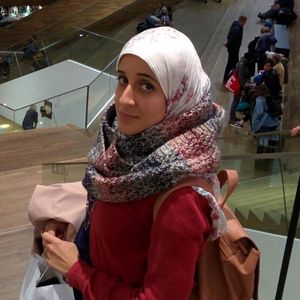 My mission is to develop data analysis from our observations and apply it to the output from the Kühlungsborn Mechanistic Circulation Model (KMCM).

My name is Marwa Almowafy, I am a PhD student in the subproject “T1: Mesoscale energy cascades in the lower and middle atmosphere”.

I am working on temperature perturbations in the upper stratosphere and mesosphere, between 30 and 80 km, caused by atmospheric gravity waves. These waves are mainly generated in the troposphere due to several processes, for example convection and flow of air over mountains. The waves are propagating upward carrying momentum and energy. Eventually this momentum and energy is deposited at higher altitudes. With the help of observations, we address the cycle of gravity propagation and dissipation which is important for understanding their role of modifying the background atmosphere.

At the Leibniz Institute for atmospheric Physics (IAP) we have a variety of observation techniques and facilities such as balloons, sounding rockets, radars and Lidars. In the frame work of my PhD, I am focusing on data from Lidar observations. Our Rayleigh/Mie/Raman (RMR) Lidar is used to study temperatures and winds in the middle atmosphere. This Lidar has the unique capability to operate even under full daylight. IAP is operating several Lidars, one of them being located in Kühlungsborn, Germany, and another one in Andenes, Northern Norway. This allows for studying the impact of latitudinal difference and upper atmospheric dynamics regarding gravity waves. We are comparing the seasonal variability of temperature fluctuations from both locations to available reanalysis and satellite retrievals. A step further will be to approve the results with our highly resolving models at IAP.

My mission as a part of TRR181 is to develop data analysis from our observations and also apply it to the output from the Kühlungsborn Mechanistic Circulation Model (KMCM).  Furthermore, I plan to construct time series of gravity wave spectra from temperature and wind data to study the behavior of power spectral indices and compare them to expectations from theory. 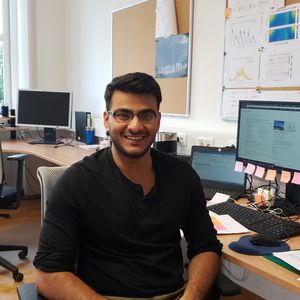 It is unrealistic to expect the numerical models to exactly simulate the real atmosphere for all observed penomena since the atmospheric flows are turbulent in nature.

Hi, my name is Kesava Ramachandran from subproject T1. My work deals with the implementation of Dynamical Smagorinsky Model (DSM) to understand the effects of stratified turbulence due to gravity-wave breaking in the MLT region using high-resolution non-hydrostatic ICON-IAP model. In this context, the investigation of energy cycle by analyzing the spectral budgets of kinetic energy and potential energy will be carried out.

Numerical models are widely used for investigations of atmospheric conditions and behaviour. It is unrealistic to expect the numerical models to exactly simulate the real atmosphere for all observed phenomena since the atmospheric flows are turbulent in nature. The set of mathematical equations that describe such flows are nonlinear and it is impossible to solve them exactly. At least till now, no one has solved the complete set of equations. This leads to use of different modelling techniques where we resolve the wide range of time and length scales. Such atmospheric models normally consist of a dynamical core and physical parametrization.

ICON-IAP is one such atmospheric model with a novel discretization for strict representation of the conservation laws by the dynamical core. An issue not normally considered in the circulation models is the inherent diffusion due to the numerical formulation of the dynamical core. This inherent diffusion cannot be interpreted as physical dissipation. ICON-IAP discretizes the Poisson-brackets of the Hamiltonian system and guarantees consistent reversible energy pathways. As a reference for comparing, we have the observation data from Nastrom & Gage, where a -3 slope in the synoptic scale and -5/3 slope in mesoscale scale is noted for horizontal wind and temperature.

It is important to have an elaborate understanding of the different processes that contribute to the energy cycle and the interaction between different dynamical regimes since it will give us an idea on the scales at which the transport occurs. With respect to this, the governing equations are transformed so that the processes that do not contribute are made invisible. Using the transformed equation we can disentangle the contribution of the horizontal and vertical flux terms. We can also compare the spectral budgets of kinetic and a v a i l a b l e p o t e n t i a l energy and the individual fluxes between the transformed and the untransformed equation.

Analysing the kinetic and available potential energy spectrum will result in understanding the scales of the primary gravity waves transport of momentum from lower to middle atmosphere and a reasoning as to whether the concept of Stratified Macroturbulence applies when averaging about individual wave packet and to the energy cascade induced by the gravity wave breakdown in the mesosphere.

Meso-scale energy cascades in the lower and middle atmosphere 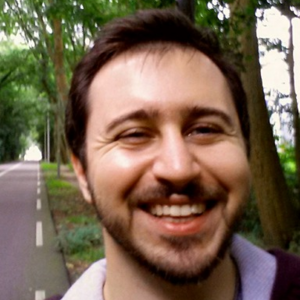 My task is to extend the recently developed parameterization for friction/diffusion for atmospheric flows to the middle atmosphere.

Hi, I am Serhat from subproject T1. As a PhD candidate, my task is to extend the recently developed parameterization for friction/diffusion for atmospheric flows to the middle atmosphere, including full accounting of the spectral budget for kinetic and available potential energy. Complex flows cover a wide range of spatial and temporal scales and it becomes practically illogical to expect existing computational technology to simulate a realistic atmosphere for all observed phenomena. Thus, the emergence of accounting for the effects of unresolved scales is inevitable, resulting in what is known as the turbulence closure problem.

Closure is handled via the so-called Dynamic Smagorinsky Model (DSM), in the Kühlungsborn Mechanistic general Circulation Model (KMCM). This scheme eliminates ad hoc tuning for the parameterization and allows a space-time dependent mixing length, fully determined by the resolved flow.

Observational data from Nastrom & Gage point to transition from synoptic -3 slope to -5/3 in mesoscales for horizontal motion and temperature, providing a solid reference information for comparison. Atmosphere being strongly effected by gravity, anisotropic formulation is needed for DSM and the arguments of Stratified Macro Turbulence (SMT) comes into play for the aid, yielding an additional constraint on the dependence of vertical form of DSM on its horizontal part.

On top of all these intertwined descriptions of turbulence, scale invariance sets the tone and dictates equations to keep their forms unchanged for inertial regimes, including parameterizations. A dynamically determined mixing length complies with this requirement and definition of parameterization is completed. It should be emphasized that sub-grid scale motion is considered as a modelling of friction from a thermodynamic point of view. In this manner, only forward energy cascade with no backscatter must result on average from the spectral analyses of the circulation model.

Reasoning for a unidirectional energy cascade stems from the Lorenz Energy Cycle, where the conversions between kinetic, available and unavailable potential energy drives the climate. To appropriately represent this cycle detailed description of entropy production, i.e. friction due to motion is crucial. DSM appears as a comprehensive method to address above-mentioned demands in general circulation modelling. As a result, friction/diffusion in atmosphere represented in the framework of turbulence modelling creates an exciting meeting of seemingly distant fields.

LES Simulations of Energy Fluxes in the Surface

“However at Submesoscales, a lack of observations means that it is not yet clear which process dominate in energy dissipation.

I am investigating the energetics in the oceanic surface mixed layer.

I studied a dual major in `Environmental Sciences` as well as `Atmospheric and Ocean Sciences a the University of Cape Town, a true amalgamation of the earth sciences. Following a successful research cruise in the Southern Ocean in 2015, I moved my studies to the IfM in Hamburg.

I am a member of the TRR subproject T2 “Ocean Surface Layer Energetics”. The importance of the upper-ocean Surface Mixed Layer (SML), an interface between the ocean and Atmosphere goes without saying. It is responsible for communicating atmospheric fluxes into the ocean interior, and is the most energetic part of the ocean! Processes in the SML interact to produce a variety of energy transfers. However at Submesoscales, a lack of observations means that it is not yet clear which process dominate in energy dissipation. Consequently, climate models often artificially create or dissipate energy. T2 seeks to rectify this! Using a combination of observations and large eddy simulations, the main aim of our subproject is to identify, quantify and parameterize these dominant processes. Ultimately, this will expand our understanding of the conceptual energy cycle of the ocean, providing more energetically consistent surface mixed layer parameterisations for climate models.

I am responsible for running, and the analysis of the LES. One set up of interest, and common place in the upper ocean, are oceanic fronts. Often close to thermal wind balance, not quite in equilibrium, they are unstable to a “family” of possible submesoscale instabilities.

The figure below, produced from one of our runs, is an example of such a set up. It shows the evolution of a baroclinic front in the mixed layer. The colour scale gives the buoyancy and the white contours indicate the associated eastward jet.

High-resolution data for a better understanding of energy budgets 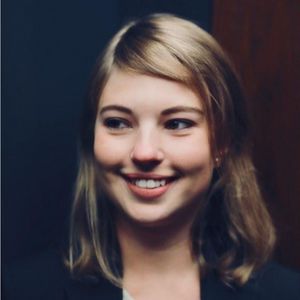 I am driven by the translation of large amounts of data into palpable results that improve the understanding of a system while also allowing the identification of further knowledge gaps.

My name is Larissa Schultze and I am a Postdoc at the Helmholtz-Zentrum Geesthacht. I am passionate about data and I am eager learn about and implement methods that support the analysis of collected measurements and of simulation results. I am driven by the translation of large amounts of data into palpable results that improve the understanding of a system while also allowing the identification of further knowledge gaps.

Within the TRR 181, I work with principal investigator Jeff Carpenter in the subproject T2, in which we tackle the energy transfers of the surface mixed layer. I make use of observational methods and numerical modelling to study stratification, turbulence and mixing in shallow seas. The observational approach focuses on the processing and analysis of high-resolution data collected by autonomous underwater gliders equipped with an instrument package for small-scale turbulence measurements. Generally, the gliders are controlled via satellite and are able to uninterruptedly collect data for several weeks even under adverse weather conditions. The gliders are able to measure physical properties ranging from the surface of the water column until approximately a thousand meters depth. This, for example, advances knowledge of turbulence levels, mixing rates and heat transfers across the water column during storms. As for the numerical modelling, I conduct Large Eddy Simulations using PALM (Parallelized Large Eddy Simulation Model for atmospheric and oceanic flows) to improve the understanding of wind-wave dynamics.