Dynamical regimes are flows that share common and uniform dynamical or statistical properties, often within a well-defined region of space or time. More generally, we speak of dynamical regimes in the sense of a flow decomposition into constituents with uniform properties, most prominently Rossby waves or “balanced flow” on the one hand and inertia-gravity waves (or, for short, gravity waves) on the other.  In order to understand couplings between these processes and the two wave regimes, this subproject aims at their separation and quantification.

The need to quantify the individual constituents of different dynamical regimes arises, first, from the wish to understand their overall dynamics and interactions and their roles in the energy pathways in the atmosphere and ocean. Second, dynamical regimes give rise to bulk properties of the flow, such as vertical momentum fluxes in the atmosphere and spectral characteristics of mesoscale and submesoscale currents in the ocean, which can be learned from high-resolution models but need to be parameterized in relatively low-resolution simulations as are used in climate models. Third, we need to develop tools to detect the remnants of unresolved dynamical regimes from properties of the large scale flow, for example to couple gravity wave parameterizations to the dynamical core.

(a) apply the so-called optimal balance algorithm to realistic primitive equation models, and
(b) systematically evaluate the vertical momentum fluxes associated with Rossby and inertia-gravity waves using 3D linear wave theory with a focus on the tropics.

The results will provide, among others, a novel scale-dependent quantification of the vertical momentum fluxes associated with different atmospheric regimes in analyses and climate models, as a guide for their improved parameterization in climate models. In addition, we will not only provide new and improved diagnostics but also obtain a deeper understanding of the concept of balance itself, especially in the context of global and complex models. For this,  a Telescope-ocean-simulation, which has  the focus in the Walvis Ridge and simulates not only sub-mesoscale and mesoscale eddies but also internal tides,  will be carried out in a joint effort with other subprojects, especially with L4 and W2.

Both the large-scale currents and the meso-scale eddies in the ocean are essentially balanced, with geostrophic or gradient-wind balances in the horizontal and hydrostatic balance in the vertical. Moreover, meso-scale eddies tend to transfer energy upward towards larger scales. This situation points to the challenging question of what are the ocean's routes to dissipation that are needed for the interior general circulation, including its related eddy field, to reach an equilibrium state in the presence of the constant atmospheric forcing. This subproject contributes to answering this question by exploring the route to dissipation via spontaneous wave generation: Eddying flows spontaneously emit internal waves. The waves, once generated, are refracted by the eddying flow, and may be captured later. Wave capture is characterised by an exponential increase in wavenumber and wave amplitude and an exponential decrease in the intrinsic group velocity. While capture is well understood theoretically for various types of flows, it is still open whether it occurs in the real ocean. By spontaneous emission and subsequent interaction with the emitted waves, energy is transferred from meso-scale eddies to smaller scales where instabilities and smallscale turbulence complete the downscale cascade to dissipation.

Quantifying this route to dissipation is central for the present CRC. Specically, this subproject aims to address the following questions:

We will address these questions using a combination of theory, conceptual models with idealised configurations based on rotating shallow water equations, and existing and specially designed numerical experiments with an ocean general circulation model based on the primitive equations. 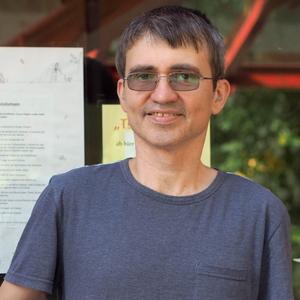 Recently we have learned how to combine the framework with stochastic turbulent closures, thereby making another step towards realistic turbulence models.

Ideal (i.e. non-dissipative) fluids are characterized by a number of conservation laws, which are the defining features of the motion, such as

In many applications the dissipation can not be ignored, whereupon all of the above laws must be modified appropriately. However, in order to establish the ideas, it is useful to stick to the non-dissipative case initially. My work in TRR 181 is focused on developing “simplified” models that inherit the conservation laws from their parent system. This branches into two distinct sub-projects.

1. Lagrangian turbulence models.  Common approach to turbulence modeling is based upon averaging the equations of motion at each spatial location (e.g. Reynolds averaging). While very natural, this approach destroys material conservation laws. This can be remedied by using more elaborate procedures, known as Lagrangian averaging, based on averaging fluid parcels’ trajectories. Combining the recently introduced concept of geometric generalized Lagrangian mean (geometric GLM) with averaging of the variational principles, we developed a turbulence framework, which guarantees the inheritance of the above conservation laws by the model.

Using this framework, we derived a number of idealized turbulence models, namely for the primitive and Euler-Boussinesq equations, Euler’s equations of ideal fluid flow, and the multi-dimensional Burgers’ equations.  While working on these models, we found that our framework is highly adaptable to different physical contexts (compressible and incompressible flows, manifolds, various boundary conditions, anisotropy are all treatable within the framework) and leads to models with desirable mathematical properties (well-posedness, filtering of small scales). Another advantage is that the framework is not bound to a particular choice of scalar-averaging (e.g. time-averaging or statistical averaging). Recently we have learned how to combine the framework with stochastic turbulent closures, thereby making another step towards realistic turbulence models.

The bulk of work done up to now provides a proof of concept for our methodology. Several steps still need to be taken, in order to make the concept attractive to applied scientists. One is the inclusion of dissipation. Another avenue is further adapting the framework to a specific physical context (for instance, incorporating the concept of isopycnal averaging for the ocean models)  and developing corresponding parametrizations in the closure.

Three papers so far were written for this sub-project: one is published, one is submitted, and one is in preparation.

2. Variational approximations for rescaled fluid models. A powerful method of studying equations of mathematical physics is rescaling of equations of motion followed by their asymptotic analysis. However, when applied to Lagrangian system, this approach has an important drawback as it potentially destroys the variational structure of the problem and associated conservation laws.

We completely resolved the question for inviscid homogeneous fluids, thereby developing a systematic procedure for constructing  conservation laws-preserving approximations to the rescaled systems. It turns out that many known models are trivial to derive using our framework. For instance, the inviscid primitive equations fall within the framework as an approximation to Euler-Boussinesq system.

The problem that initiated this project comes from equatorial dynamics. There is much theoretical interest in the dynamics  of  planetary-scale  Kelvin  waves for the purpose of   atmospheric   and   oceanic   data   assimilation. This calls for a geophysical balance model, which retains equatorial Rossby waves in addition to Kelvin waves. The work on deriving the required balanced model is about to begin. Another direction of our research is to obtain models of front-formation in atmosphere and ocean due to strong meridional temperature gradients. Further applications are likely as the framework should prove useful whenever approximate models are sought in an anisotropic setting.

The theoretical paper for this sub-project will be submitted for publication in the nearest future. Two further papers on equatorial balance models and front-formation models are planned. 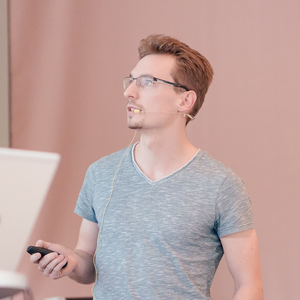 To identify spontaneously emitted waves in a more or less realistic setting I use a high resolution global ocean model.

Hi, my name is Thomas, I am a PhD Student in subproject L2 “The interior energy pathway: internal wave emission by quasi-balanced flows” at the Max-Planck-Institute for Meteorology. This project tries to answer the question to what extend spontaneous wave generation contributes to the ocean’s route to dissipation.

The ocean’s route to dissipation is not yet fully understood. Both the large-scale currents and the meso-scale eddies in the ocean are essentially balanced. Moreover, those eddies tend to transfer energy upward towards larger scales. So the question arises how the energy is transported from the large scales to the small scales, where the energy can be dissipated. Spontaneously emitted waves can be refracted by the eddying flow and captured later. Wave capture is a possible way to transfer energy to smaller scales. I am contributing to this question by identifying spontaneously emitted waves in an OGCM.

To identify spontaneously emitted waves in a more or less realistic setting I use a high resolution global ocean model. The model runs in two configurations: One is a realistic setting forced by 6-hourly atmospheric fluxes obtained by reanalysis data and a second one with temporally constant forcing. By comparing the two simulations I found wavelike structures which are not generated by external forcing but by the eddying flows itself. The properties of these structures identify them as gravity waves which are likely to be generated by spontaneous emission. Further analysis may show to what extend these waves contribute to the ocean’s route to dissipation.