Oceanic eddies, fluctuations on scales on the order of one km to hundreds of km, derive their energy primarily from baroclinic instability processes. It is common to parameterize this loss of available potential energy of the balanced flow in ocean models by an additional eddy-driven advection velocity, or, equivalently a skew diffusivity. In addition, eddies also mix tracers along isopycnals, which is implemented as along-isopycnal diffusion with isopycnal diffusivity. Eddy diffusivities currently are specified in coarse ocean models without connection to the energy budget, and, more fundamentally, it is unclear to what extent, where and on what scales the downgradient eddy-diffusion model is appropriate at all. Rotational components of the eddy fluxes associated with the advective terms in the eddy variance equation are generally large, so that production and dissipation of eddy energy do not balance locally.

Our main questions are:

To address these questions we will use Lagrangian particle statistics in both eddying ocean models and observations to assess the spatial and temporal variability of eddy diffusivities, eddy-mean flow interactions, and submesoscale processes, and to quantify dispersion regimes on different scales to assess the eddy-diffusion model and get insight into energy cascades. In-situ observations and a Lagrangian drifter experiment at the upwelling front in the Benguela current system will  serve as the major observational reference to study the lifetime of meso- and submesoscale features, as well as their dissipation in the interior ocean. Results from the analyses of observations and eddying ocean models will be used to construct energy-consistent parameterizations that use prognostic equations of eddy kinetic energy, taking non-localness into account.

During the cruise to the Benguela upwelling region off the coast of Namibia from Nov 15- Dec 10, we deployed 37 surface drifters that captured the meso- to submesoscale variability close to the boundary current and along the sampled filament. Together with high-resolution submesoscale permitting modelling of that region and the global eddy-permitting POP we pursued the following goals: 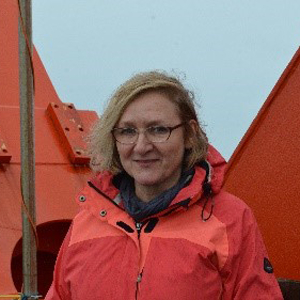 Our observational data will serve the model as a reference that includes smaller scales that the model is not able to cover.

In September 2016 I started working as a postdoctoral researcher in the subproject L3 Diagnosing and parameterising the effects of eddies at the Universität Hamburg with Kerstin Jochumsen from Experimental Oceanography and Alexa Griesel from Theoretical Oceanography. Having a background in nonlinear dynamics and statistical physics in application to complex systems, I am strongly attracted by the aim of our research project and by the possibility to work within an inspiring interdisciplinary research network as created by the TRR181 with its great possibilities for exchange with scientists of different fields.

A major link to my former research consists in the analysis of trajectories (derived from in situ experiments or modeled by stochastic processes) and more specifically the analysis of broad (non Gaussian) Langrangian statistics of absolute and relative dispersion. The goal of our research subproject L3 is the quantification of eddy diffusivities and eddy-mean flow interactions by using Langrangian particles statistics in both eddying ocean models and observations. Its aim is to develop and to test energy consistent parameterisations of meso- and sub-mesoscale processes for the global ocean with a focus on 100 km -1 km scales.

At the beginning I developed and tested float deployment strategies by means of the high resolution POP model. In November/December 2016 our cruise with the RV Meteor took place in the atlantic-sea off the african coast. The cold upwelling front off Namibia's coast in the area of Luderitz has a highly irregular structure due to eddies and filaments, finger-like structures of cold upwelling water pushing west into the warm surface waters offshore (see Figure 1). In our field experiment we explored mesoscale and submesoscale structures within a filament by satellite-tracking 37 surface drifters which we released in groups of triplets. As a first result we find that, due to the underlying rich mesoscale system, the dispersion statistics are very different depending on the location of release. While the drifters of the group released at the southern border of the filament separate slower (Figure 2a), the drifters in the group released closer to the upwelling system at the northern border of the filament separate faster from each other and follow distinct paths within the complex surface currents (Figure 2b). Currently our research focuses on the relative dispersion of drifter pairs (and its corresponding probability density function) as its properties depend on the kinetic energy spectrum. The statistical analyzing of single particle dispersion and the comparison of our findings with dispersion statistics of ocean model will be a next step. Here our observational data will serve the model as a reference that includes smaller scales that the model is not able to cover.

More Information about the research cruise on RV Meteor (M132) including reports, posters and videos of the scientific work have a look have a look at our TRR181 homepage.