We combine methods from formal asymptotics, mathematical analysis, dynamical systems, and stochastic analysis. Our primary focus lies on understanding phenomena and mechanisms – we believe that a better understanding of the nonlinear interactions between scales, waves and the flow regimes will be essential in evaluating and improving numerical weather and climate prediction models. Only in the nonlinear regime can we develop energy consistent schemes. Here we will approach this problem from 3 different directions:

While 1. and 3. will concentrate on foundational aspects of the problem, 2. will already check its validity using the ICON model in idealised set-ups.

The purpose of this work package is to look at balance and, more generally, multiscale phenomena, addressing the following questions.

The first question aims at the classical derivation of balance models via a succession of approximations, e.g. Boussinesq, hydrostatic, thin-layer, and small pressure gradient approximations lead to quasi-geostrophic models.

To answer the second question, common techniques in perturbation analysis involve matched asymptotic expansions. This is not very likely to be practical except for toy situations. Our work will therefore go into two extreme directions. First, when using balance relations as a pure diagnostic, active matching is not required, so the remaining difficulty is detecting the regime switch. At the other end of the scale, we propose to look into variational approaches where the matching is intrinsic to the geometric construction. An important advantage of variational asymptotics is the natural preservation of conservation laws for energy, momentum, and vorticity in the limit.

In this work package we propose to study nonlinear waves and bifurcations associated with the linear wave modes in equatorial quasi-geostrophic balance and adjustment, including energetically consistent dissipation parameterisations. Based on the recent progress in studying inviscid and (molecularly) viscous nonlinear waves, new approaches to quasi-geostrophic balance will be used to derived reduced models and study the wave phenomena therein. Dissipation modelling and parametrisation towards energy consistency will be included.

Aiming at mathematical rigour, we will build upon a combination of asymptotic analysis and bifurcation based numerical approaches. Mathematical well-posedness will be addressed, and nonlinear solutions will be numerically tracked by numerical path-following and bifurcation analysis. Starting with simple single layer problems in one-dimensional extended domains we will work towards higher space dimension, stratification and spherical geometry.

In this work package we will use asymptotic multi-scale models to systematically derive effective dynamic-stochastic models for the resolved scales. These model hierarchies will provide a framework for the systematic treatment of the interaction between different flow regimes and representation of unresolved scales in numerical models and will constitute a systematic framework for stochastic parameterisations. In this setting, fast synoptic- and meso-scale interactions will be systematically represented by a stochastic Ansatz.

While the full unforced and inviscid equations conserve energy and momentum, this is not necessarily the case for the truncated systems. There will be energy, enstrophy and momentum transfers between the resolved and unresolved scales. Most current deterministic parameterisation schemes do not reinject energy into the resolved scales, instead they are effectively an energy drain. Similarly, current stochastic parameterisations are operated mainly ad hoc without consideration of energy and momentum consistency. This likely contributes to the significant observed model bias.

While it is possible to derive energy conserving reduced stochastic models for some systems, here we will focus on conservation in an ensemble sense so that energy and momentum fluctuate around a mean value in individual model simulations. In the real atmosphere and ocean, energy would flow between the scales we can resolve and the ones we cannot. So in reduced order or truncated systems—climate models are clearly in this category—the energy should fluctuate around a mean value.

As part of his visit he gave a TRR seminar entitled „Statistical Dynamical Subgrid Scale Parameterisation“. First he introduced the overall methodology and then he showed how this approach can be employed to atmospheric as well as ocean models with very good results. His seminar spark a lot of interest and subsequently Terry had many meetings with other TRR scientists but also non-TRR scientists from the Universität Hamburg and the Max-Planck-Institute.

Furthermore, we discussed energy consistent subgrid modeling and stochastic modeling approaches which are of particular importance to project M2. We started a joint project in which we will examine how stochastic subgrid scale parameterizations will affect coupled data assimilation and predictability.

We also finalized a book we are together editing on „Nonlinear and Stochastic Climate Dynamics“ to be published by Cambridge University Press later this year.

Prof. Edgar Knobloch from UC Berkeley visited Jens Rademacher in Bremen to discuss the M2 project related questions. An expert in nonlinear fluid phenomena, multiscale analysis and modelling, Prof. Knobloch’s work is very relevant for the M2 area in general and project M2-2 in particular. His work on the influence of viscosity, scaling regimes and models in geophysical flow directly overlaps with the projects’ fundamental questions. Inviscid models fail to accont for the sometimes profound effect that viscous layers have on the bulk flow. Moreover, the energy flow through scales ultimately requires viscous dissipation and suitable driving. During the visit also the question of the role of nonlinear waves in the enery flow were discussed and it seems that many questions remain open at this point. This is especially true in the context of geostrophic balance. 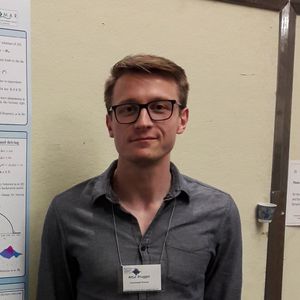 I can show that for certain type of backscatter there are exact exponentially growing solutions, which shows that energy can get concentrated at some scales, rather than be transferred across scales.

Hi, my name is Artur. I am a PhD student at the University of Bremen and I am a member of the subproject M2 “Systematic multi-scale modelling and analysis for geophysical flow” since April 2017. My supervisor is Professor Jens Rademacher and I work in his research group “Applied Analysis”.

My research is about investigating the effects of various damping and driving realisations on the dynamics of different geophysical fluid models. Waves in linearisations of these models often characterise large scale phenomena in the ocean and atmosphere. I am interested in finding and analysing solutions of the full nonlinear equations.

Exact steady solutions for instance can bifurcate from trivial solutions by changing some parameters. In various cases we can prove analytically when these bifurcating waves occur and we can also determine some of their properties, such as their stability. With numerical tools we can corroborate these results and obtain additional insights into their structure and further properties.

Somewhat surprisingly, there are also linear waves that solve the full nonlinear problem. I was able to extend the class of known solutions of this type and for the first time took into account backscatter. For instance, I can show that for certain type of backscatter there are exact exponentially growing solutions, which shows that energy can get concentrated at some scales, rather than be transferred across scales.

For the investigations I use simple models like the single-layer and two-layer shallow water model as well as more complex ones like the Boussinesq approximation and the Navier–Stokes equations. In order to analyse the dynamics numerically I use the Matlab package “pde2path”.

With our investigations of idealised cases we hope to gain a better understanding of the different models used in the ocean and climate research. It is not only important from the mathematical perspective, but also could help to evaluate and improve numerical prediction models for weather and climate. 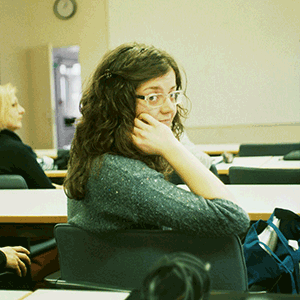 My work is focused on developing a stochastic parameterisation for the interaction between different flow regimes that will still preserve the total energy of the system and require not too much computational time.

Hi, I am Federica and I am a PhD student in project M2. I studied mathematics and now I am working at the Meteorologic Institute of the University of Hamburg. Mathematics and physics are very intertwined one with the other: improvements in understanding the mathematics leads to physics advances to new realizations which in turn help developing more accurate mathematical models. The invention of the computer and the improvement of this technology, allowed more and more mathematical theories to find useful applications and one field for those applications is also climate (and ocean) modeling. Even though a lot has already been accomplished in this field, there is still room for development. There are material limitations (as computer processors, memory storage, computer precision, etc…) as well as theory limitations (not all the phenomena taking place are fully understood at the moment and the techniques used to model them are not always accurate enough) that have to be overcome.

This is where my work takes place. To be more specific most climate models include only the slow and most energetic modes since including also the fast modes would require too much computational time. However, in real atmosphere and ocean there is energy, enstrophy and momentum transfer between the resolved and the unresolved scales. Most current deterministic parameterisation schemes do not re-inject energy into the resolved scales; instead they are effectively an energy drain. Similarly, current stochastic parameterisations are operated mainly ad hoc without consideration of energy and momentum consistency. Recent studies showed that neglecting the fast unresolved modes induce also error growth, uncertainty and biases in the model therefore they should be included somehow. My work is focused on developing a stochastic parameterisation for the interaction between different flow regimes that will still preserve the total energy of the system and require not too much computational time.

Stochastic processes have some nice features that make them suitable in climate and ocean modeling. However, when dealing with stochastic processes, extra care should be employed. Their main feature is to have different realizations with same initial conditions. Therefore, if you find something worked fine once, you should be sure it was not just luck!

We are proud to announce the first TRR 181 PhD defense by Federica Gugole (PhD M2). more ›

The objective of this course is to provide an opportunity for junior researches to obtain a first-hand introduction to contemporary coherent structure detection techniques and computational algorithms. more ›